Reduction in Working Hours in the UK

Reduction in Working Hours in the UK

A new trend has been festering over the last few months. This is due to the combination of COVID forcing people to start working remotely and the realisation that the current way of working has many limitations. Companies are regularly faced with issues related to employee burn-out, stress-related illnesses, and a lack of employee engagement and productivity. These issues have led companies to start considering new ways of working. This includes flexible working, remote working, and a reduction in working hours.

Recently, a trend has been occurring in which UK offices have seen a reduction in the number of ideal working hours. According to new research from Workthere, the ideal working hours for UK office workers has decreased by 3 hours. The survey which was conducted with 1000 UK office workers found that the average working week has decreased to 29 hours a week, in comparison with the national average of 32 last year.

The disruption caused by the COVID outbreak is claimed to have had an effect on the number of working hours people are wanting to work. As workers all over the country have had no option but to begin working completely from home, questions have been raised regarding the correlation between productivity levels and the number of hours worked. Employees are realising that by structuring their working day in a different way, they can be more productive and efficient and get what they need to do done in a shorter space of time. Thus meaning they don’t necessarily have to work so many hours a week to work to the highest standard.

Reduction in levels of employee exhaustion

According to one study, employee tiredness is costing the UK economy £40 billion a year. Employees who sleep less than 6 hours a night lose on average 6 more working days a year through absenteeism, as well as working at a sub-optimal level, decreasing productivity levels. This not only costs the employees’ company money, but also costs the UK economy. Sleep deprivation caused by long working hours not only has economic repercussions, but also serious health consequences too. Sleep deprivation leads to a higher mortality rate. According to a study conducted by the University of Warwick and University of Naples Medical School, those who slept 6 or less hours a night had a 12% increased risk of death.

According to a study undertaken by Relate, 27% of people work more hours than they would like. Which is consequently having a negative impact on their health. Overworking causes many health-related issues such as diabetes, heart disease. Along with mental health issues such as anxiety, depression and memory loss. A 2012 study by PLOS ONE revealed that those who worked long hours, had a higher chance of experiencing depressive episodes. Additionally, working longer hours also leads to riskier behaviour traits. In 2015 a study by The BMJ revealed that those who work longer hours are more likely to consume a risky amount of alcohol than those that work fewer hours per week. This is due to alcohol becoming their coping mechanism. Thus, by simply reducing the working hours of employees to a healthy amount, all the health issues related to overworking become significantly reduced.

When people work fewer hours a week it reduces their stress levels. Overworking is highly correlated with burnout, and stress related health issues. Therefore, working fewer hours reduces stress in the workplace. As well as catering to a more balanced lifestyle, which means happier employees. Reducing employees’ hours, gives them more time to exercise, sleep (as previously mentioned). Which further works to improve their standard of living. Additionally, with more time in their day, employees have more time to spend with friends and family, or to do a hobby. They, therefore, have more balanced lives and will generally feel happier. With happier employees, comes higher rates of productivity. Making it a win-win situation for both employees and the company.

It is a myth that longer working hours improve productivity levels. Working longer hours does not equate to working more productively. In fact, the Harvard Business Review undertook an investigation which revealed that working longer hours does not help us in any way. Productivity levels suffer when employees are tired, stressed or feeling depressed. This means employees spend longer on tasks and don’t produce as good work. Research has found that shorter weeks improves employee productivity and efficiency by enhancing employee health. Employees will also feel more motivated to get the work done. As it gives them a sense of control over their own working schedule, which is empowering. Additionally, as they have less time to finish their work, it will push them to work harder, in a healthier and more productive way.

If a company can boast to have shorter working weeks through fewer working hours, it makes them a much more attractive option to potential employees. Making them a target company to work for. Thus increasing their candidate pool and therefore improving the quality of candidates. Furthermore, due to the benefits that come from working fewer hours, retention rates will improve. This is good for team morale as the longer people stay within a company the better the sense of team spirit and collaboration. Additionally, it saves the company money by not needing to go through the recruiting and training process.

The city of Gothenburg in Sweden introduced a 6-hour working week as an 18-month experiment. The results were hugely positive. Employees took less sick leave, reported being in better health and fealt more productive and motivated. However Sweden is not the only country toying with the idea. Finland’s new Prime Minister has been considering the prospect of working 4 days a week. This is due to the mounting investigations which prove the legitimacy behind the idea. In August, Microsoft Japan experimented by reducing employees’ working hours through a 4 day week and productivity increased by 40%. Additionally an organisation in Melbourne Australia found that 6 hour working days eliminated unproductive behaviours in employees such as wasting time looking at internet websites or sending pointless emails. Some UK based companies have also implemented 4 day weeks for their employees including Think Productive, Portcullis Legals and Elektra Lighting.

Factorial’s time tracking feature includes personalised time and attendance software, a time tracking software that increases productivity and reduces absenteeism. Including a clock in and out feature in which employees’ attendance can be monitored and from this data you can create custom reports and track company working hours to make better decisions about your team.

✅ Sign up to Factorial today and receive your free 14-day trial!

Categories HR Tips
According to a recent survey, a whopping 71% of managers said that meetings are unproductive and inefficient.  Which begs the question: why would any manager [...]
Charlotte Evans
May 27, 2022

Categories HR Tips
The role of an HR manager is extremely important. They are responsible for ensuring the smooth running of any organisation. They are in charge to [...]
Charlotte Evans
May 19, 2022 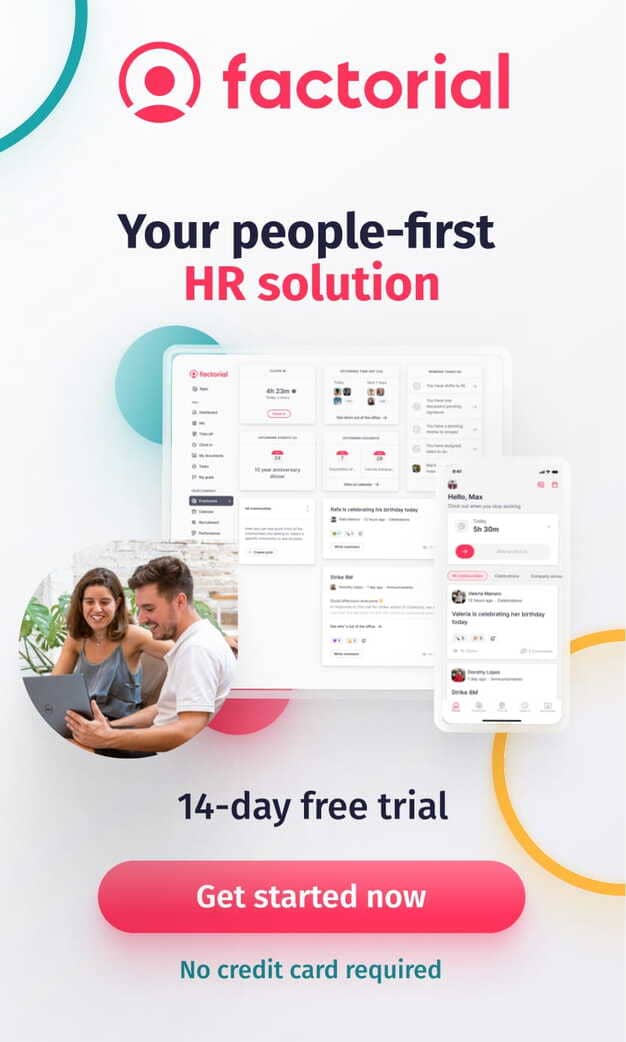